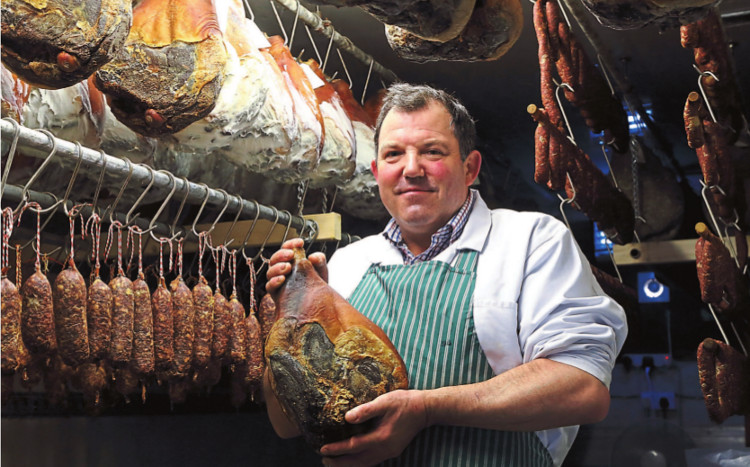 Peter's first venture into pig farming was when he was eleven with the purchase of a large white sow and 10 piglets. Some years later he was farming 200 sows, producing 4000 pigs per year, mainly to supply supermarkets. In the 1990’s the price of pigs collapsed resulting in huge financial losses, a situation that could not go on!

Peter had always supplied pigs to friends and family and a decision was made to see if he could take the butchery side of the business further. So pig numbers were reduced to a more manageable number, a grain store was converted to a butchery and farm shop and Wenlock Edge Farm was born. Peter and his Father started two farmers markets in the 1990’s in Shropshire selling home produced, sausages, bacon, black pudding and ham of the highest quality, and very quickly Wenlock Edge Farm became the main stay of the farm business. Wenlock Edge Farm quickly gained a reputation for pork products of unrivalled quality.

Peter's Grandmother was Swiss, and he had always been brought up with air dried meats and from day one there was a desire to produce these traditional products from his childhood. These meats proved to be very popular with friends and therefore he felt that there was an opportunity to produce a range of British charcuterie. Little did Peter know at the time that he was one of the first people in Britain to produce salami, air dried meats, etc.

At that time charcuterie was often considered “foreign” food and not widely appreciated. However, tastes have changed and people are much more adventurous, knowledgeable and eager to enjoy different foods.

British Charcuterie is now very popular and Peter is very proud to have been a pioneer of these products. Wenlock Edge Farm currently sell from their farm as well as online and wholesale to restaurants, pubs, farm shops and delicatessens across the UK. Alison, Peter’s wife, has a background in catering and helps Peter in the development and production of their range. Wenlock Edge Farm also attends farmers markets across the Midlands where people que for their products. The Wenlock Edge Farm range of charcuterie now includes Hunter’s Salami, Pork and Fennel Salami, Coppa, Bresaola, Panchetta, Chorizo, Shpek and Prosciutto hams which are aged for a minimum of 18 months in a specialist drying room.

At the same time as developing our range of charcuterie products, Peter has continued to produce British pork products with the same attention to detail.